Update on an investigation by the Australian Transport Safety Bureau 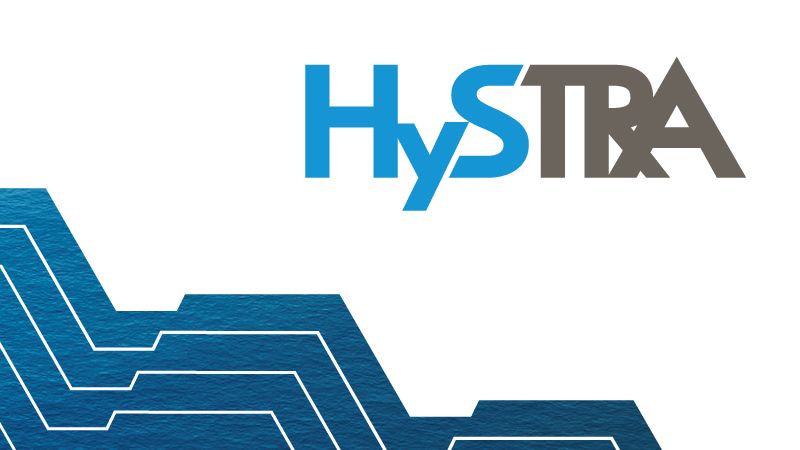 On 25 January 2022, while the Suiso Frontier was moored at the port of Hastings, the one of the two solenoid valve systems (device for transmitting instructions to the damper) in the gas combustion unit (GCU) suddenly stopped, and a ship crew observed a lighting and smoke in the gas combustion unit (GCU) on the vessel for a few seconds, that was presumed to be a small flame. The crew immediately and safely performed a manual shutdown of the unit. There were no injuries and no damage to equipment and environment.

HySTRA reported the incident to the Australian Maritime Services Authority (AMSA) within the day, and the Australian Transport Safety Bureau (ATSB) and Nippon Kaiji Kyokai (ClassNK) inspected the vessel on 27 January. On 28 January, with a confirmation there is no issue for navigation as the GCU can be used by switching over from the one solenoid valve system (failed one) to the other system, the vessel was cleared to depart by AMSA and left for Japan. On 8 March, after the vessel arrived in Kobe, HySTRA made the necessary parts replacement. The pilot voyage continues after the gas combustion unit was confirmed to be operating normally without incident recurrence.

HySTRA reported the completion of the measures to the AMSA on 18 March, and an investigation is underway by the ATSB. HySTRA is conducting the second round of demonstration tests of the Suiso Frontier between Japan and Australia. When the vessel safely arrived the port of Hastings on 3 May, HySTRA reported the continuation of safe navigation to the ATSB.

HySTRA takes safety seriously, and will continue to strive for the safe operation of the Suiso Frontier and work on the hydrogen supply chain demonstration project. 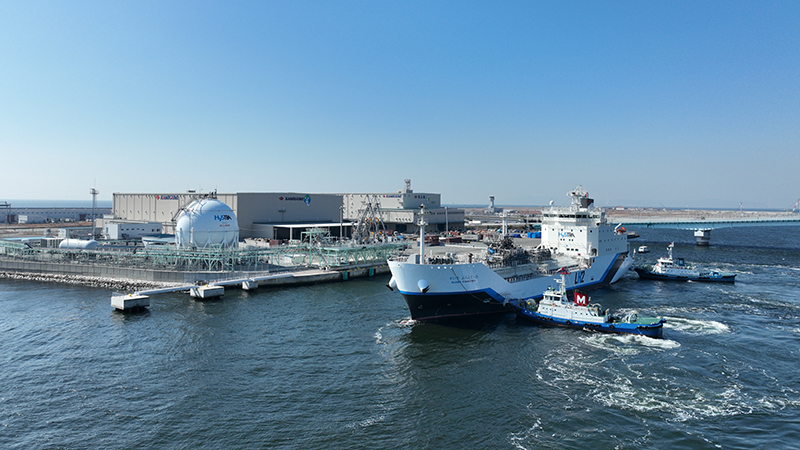 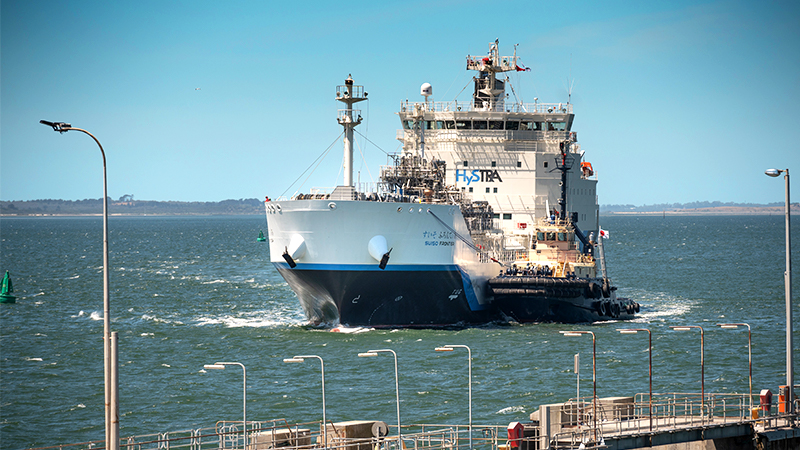 The SUISO FRONTIER commences its maiden voyage to Australia, marking the start of the World's First Demonstration of International Transporation of Large Volume Liquefied Hydrogen 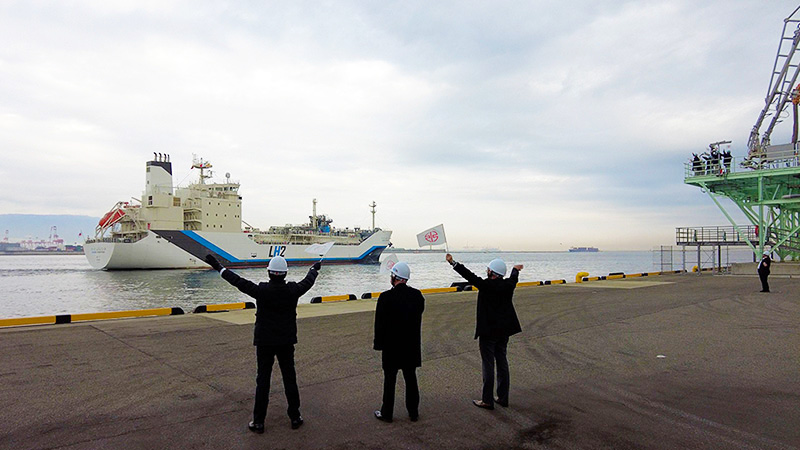 The SUISO FRONTIER left the liquefied hydrogen receiving terminal "Hy touch Kobe” on December 24, and it is expected to arrive at Hastings in Victoria, Australia for the loading of hydrogen after a two-week voyage.

After its arrival, various field tests will be conducted, and SUISO FRONTIER is scheduled to return to Kobe loaded with liquefied hydrogen generated from brown coal in the middle of February, 2022.

HySTRA will be fully engaged in the completion of the two-month technology demonstration of transporting liquified hydrogen, whichis expected to contribute to achieve carbon neutrality in the future. 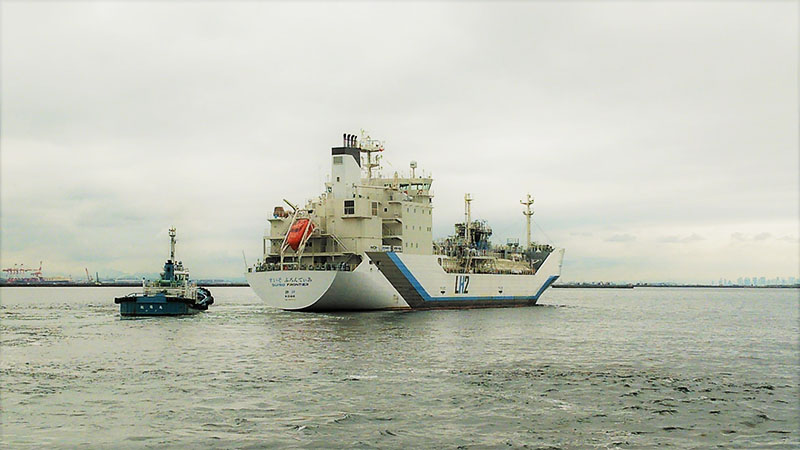 On December 3, SUISO FRONTIER became the world’s first vessel to be officially classified as a liquefied hydrogen carrier, after being registered by the General Incorporated Association Nippon Kaiji Kyokai (ClassNK).

The SUISO FRONTIER is the world’s first technology demonstration of the CO2-free Hydrogen Energy Supply-chain Technology Association (HySTRA). Because of increased awareness of an environment, hydrogen has a critical role to play in delivering energy while lowering carbon dioxide emissions and efforts are underway to enable scaled up supply and demand through this pilot project. HySTRA aims to demonstrate the feasibility of safely transporting liquefied hydrogen across international waters.

Hydrogen is converted from gas to liquid and reduces in volume by 1/800 by cooling down to a cryogenic level of -253 degrees Celsius. Such reduction in volume allows more efficient transportation. For safe transportation of mass volumes of hydrogen, SUISO FRONTIER underwent ClassNK surveys on in line with its class rules and "Guidelines for Liquefied Hydrogen Carriers" describing the safety requirements based on the IMO’s Interim Recommendations for Carriage of Liquefied Hydrogen in Bulk. On December 3, Suiso Frontier was registered for classification.

SUISO FRONTIER was built by Kawasaki Heavy Industries, Ltd. and will be managed and operated by Shell/STASCO while transporting hydrogen produced in Australia by Electric Power Development Co., Ltd. (J-POWER) to Liquefied Hydrogen Receiving terminal "Hy touch Kobe”, which is managed and operated by Iwatani Corporation. The objective is to start a large-scale international marine transport demonstration of liquefied hydrogen. A detailed schedule will be coordinated with relevant ministries and agencies of Japan and Australia, to ensure safety of travel during the COVID-19 pandemic.

The SUISO FRONTIER to begin her maiden voyage 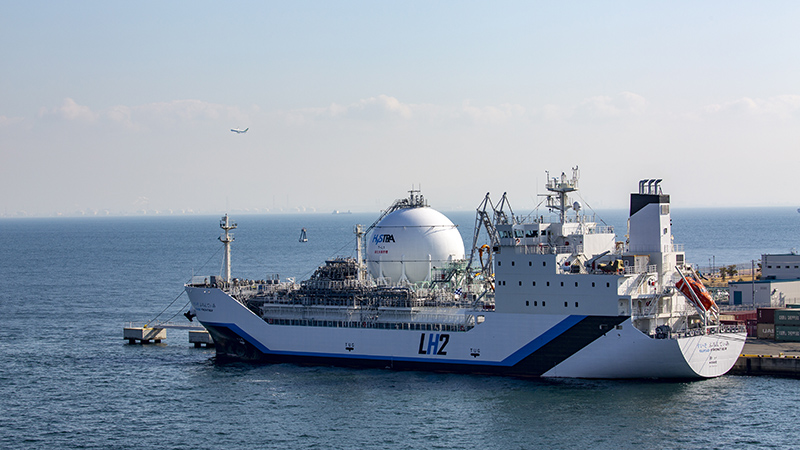 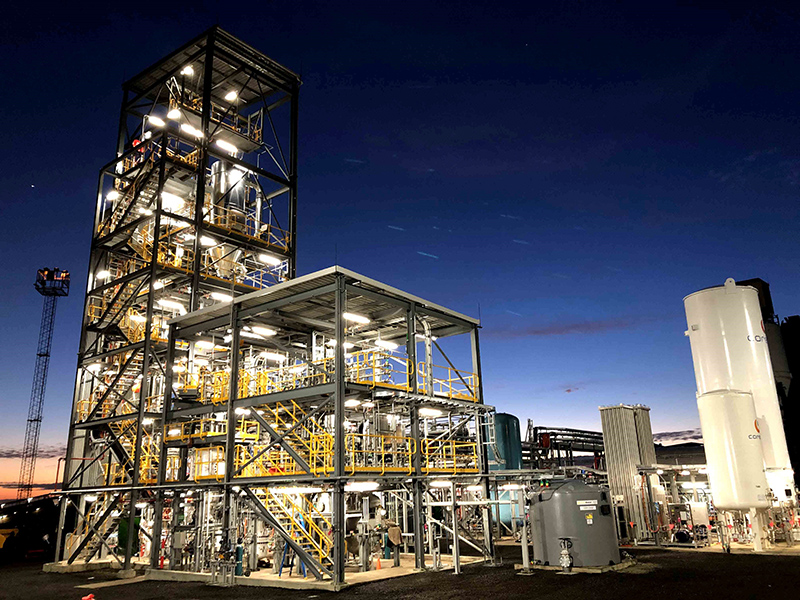 The brown coal gasification / hydrogen purification demonstration facility, having been constructed by J-Power Group at Latrobe Valley site (Victoria, Australia), started hydrogen production on 23th January 2021 and achieved a target purity of 99.999% on 25th February 2021.
In 2021, we will confirm stability of hydrogen production, and will verify the effect of biomass blending to the gasification property. The produced hydrogen will be transported to the hydrogen liquefaction / loading base at Hastings Port in the state by trailer and to Japan by the SUISO FRONTIER.